Teacher interview series: What’s it like to teach in Germany? 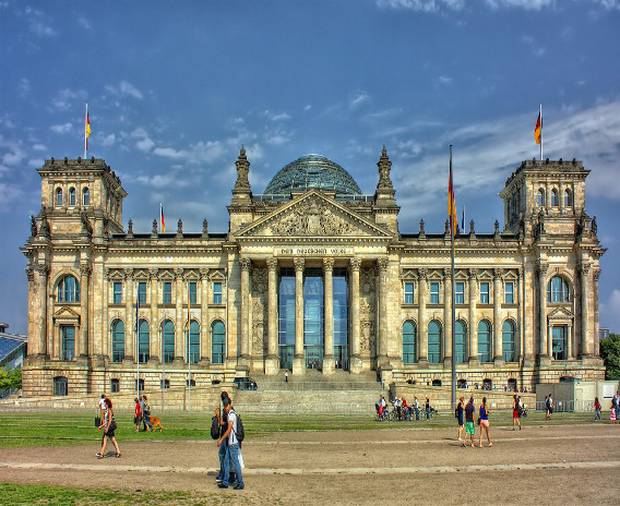 Mark Peirson is an Englishman who hasn’t called Blighty home for, well, some time! From Romania to Spain, and now Germany, Mark has taught children, adults, and businesses how to speak English. Here, in the first of our Teaching Around the World interview series, Mark tells us about life as a teacher, reflects on culture in the classroom, and reveals the pros and cons of freelancing in Germany.

Mark, you began teaching in Romania. What was that like?

Yeah, I was in Bucharest. I found it very very strange! During that time, there was one TV channel and no transport in or out. Their world was the end of the street, literally. Some people didn’t want to learn English, they didn’t see the point, as they’d got this far without it.

When you did go to Spain, the contrast must have been intense.

I went to Pamplona first, which is in Navarra in this very rural part of Spain. Some of my students spoke of Madrid like it was Tokyo. They’d say “I would love to go to Madrid,” and I’d always think… “It’s like two hours on the train, you can leave this afternoon, it’s not far!” I think the Spanish were a lot more laid back, more prepared to just have a go. I found that Romanians really wanted to know what the point was all the time. I think they were both optimistic, though.

What are your strengths in the classroom?

I think I’m quite flexible; if someone has requests I can meet them well. Some students like books and grammar because they feel they’re working harder, whereas others want to improve their spoken communication. I think I create a good atmosphere in the classroom, where students aren’t afraid to make mistakes, ask questions, or speak out loud.

How did you develop that flexibility?

Just by doing it. When I first started, I went into every class with several stages written down and if someone asked for something else, I’d think “Oh no! But I have a plan!” The more you teach, the more experience and activities you gather, so if a student springs something on you, you think “It’s ok, I’ve done that before”. You get a familiarity with the sort of questions that come up.

You’re a freelancer. How difficult is it to teach freelance in Germany?

It took a while to get going. A school will give you one class and sort of test you out and get feedback before giving you another. They sort of hold their breath and if they hear you’re still working for another school after a few months then they think you’ll be ok. After having a good relationship with two or three schools you can start to relax a bit. The downside, obviously, is not getting paid if a student cancels, although schools can find you a class at the same time until they come back or retake their course. Your schools will look after you if you help them out. If you get good feedback and help them by substituting, especially at late notice, then they’re very grateful.

How about the paperwork involved?

Germans love bureaucracy, that is a true stereotype. There has to be a document otherwise it doesn’t exist. The taxes aren’t too stressful because there are offices you can take it to. But the medical insurance is a different issue. Sometimes the prices change and they don’t really have an answer as to why and they pass you around to different representatives in the office. You also have to pay into your own pension.

There’s a freelance tax rate linked to the number of hours you do. They’re quite generous with deductions; train tickets, a new phone, a home office if you do webcam classes; they see those as business expenses. You do need to try to have at least a couple of classes with more than one school on your list, however, because, if you happen to freelance with only one school, the tax office doesn’t really believe you’re a freelancer. (For more, visit the English-language version of the official German tax office site.)

Academies have different systems too. One school of mine pays straight off the register whereas another requires a detailed breakdown of everything we’ve done that month, which can take 5 – 6 hours in itself. So you never quite know what to expect, especially around summer and Christmas, as schools can be closed because there are so many classes cancelled.

What advice would you give to teachers wanting to freelance in Germany?

Be prepared that it does involve a lot more legwork than in other places. It does take a lot of vigilance, you need to be thinking, “If that class finishes, I need to speak to someone else.” It’s a bit like a jigsaw puzzle. If a Monday class comes up in one place, contact schools in that area to say you’re already there on that day. If they don’t hear from you for a while, schools sort of forget about you and you drop ten teachers down in the pile of CVs. It doesn’t do any harm to ring in occasionally to remind them of you.

The other thing is to not let yourself get bullied into giving up classes with other academies. A lot of newer teachers think they can never say no and end up working crazy timetables. Remember that it’s a negotiation as a freelancer. Working in Germany is quite reasonable I think. Germans do think if you do the work you should get a reward for it. You will have more deductions, because of health insurance, but they pay you more to compensate. I think in Britain they would try not to, suggesting that your health insurance and you being a freelancer is your own problem, not theirs.

Once you develop a good relationship with a school and prove you’re valuable, they do tend to look after you. Some schools I teach at have freelancers who’ve been there for 25 years and they’ve had a normal life, it’s not a desperate struggle every year, they still have mortgages and go on holidays. You do have to be proactive though. (For more on freelancing in Germany, check out this site.)

Lastly, do you have any classroom tips or hacks?

What’s made a very big difference for me is sharing my experience of learning a language, in this case, German. Students get frustrated and I say, “Hey, I’m exactly the same, I’m always asking my German teacher questions.” Here, you need a qualification to do anything, you always need a bit of paper, and Germans see teachers as a real authority. So it’s made a big difference for me to be able to share with my class and say, “Yeah, I’m a student as well.”  It’s relaxed them a lot. So, if you’re learning a language while teaching another, try telling your students about it!

We’re interested in hearing from teachers for our Teaching Around the World series. From personal stories to news in education, and classroom tips and tricks – we want to know! [Keen to feature? Tell us…]([email protected])

Tags: International career, International Job, Abroad, Live abroad, Germany
Want us to feature you or your work?We want to hear from you

Test your English in minutes